For Whom the Bell Tolls


In March, when we stepped out of the dance spaces that I have relied on for almost 24 years to run my Nia classes, we entered an unusual new reality, meeting and greeting one another through our computers. In one of the first classes on Zoom I noticed the beautiful brass bell, that my husband’s mom gave him years ago, sitting by my computer. Spontaneously I rang it at the start of our class and searched for words to capture what was top of mind, top of heart to focus us into the present moment and to draw attention to something beyond myself, beyond our gathering of dancers so we could link our dancing to the challenge, tenderness, celebrations and pains of this Pandemic era. For the last 5 months I’ve made this a ritual of my classes on Zoom.
I was inspired by my neighbourhood, and people all across Canada, who had taken to their porches each evening at 7:30 pm to bang pots and cheer for the front-line workers who were tirelessly putting themselves at risk for the greater good. How could our dancing be a part of that selfless offering?

Bells are some of the oldest musical instruments in the world and said to date back to China in around 3500 BC.

Since ancient times, Buddhist monks and nuns have used bells as part of their daily meditation practices. Bells are considered a meditation enhancer, as they help practitioners keep their attention focused on the present moment. The sound of the meditation bell is thought to promote a sense of peace and calmness. (www.mindworks.org)

Ghanta (Wikipedia) is the Sanskrit term for a ritual bell used in Hinduistic religious practices. Hindu temples generally have one metal bell hanging at the entrance and devotees ring the bell while entering the temple. It is said that by ringing the bell, the devotee informs the deity of his/her arrival. The sound of the bell is considered auspicious which welcomes divinity and dispels evil. The sound of the bell is said to disengage the mind from ongoing thoughts thus making the mind more receptive. Bell ringing during prayer is said to help in controlling the ever-wandering mind and focusing on the deity.

Church bells were a common way to call the community together for all purposes, both sacred and secular. It was also believed to drive out demons. In medieval times, swinging bells were first used as a way of notifying people of fires, storms, wars and other events. The use of bells in a musical fashion originated in the 16th century. Here’s an article on the history of Church Bells in England: https://turnersco.com/church-bells-history/

At midnight on December 31, Buddhist temples all over Japan ring their bells a total of 108 times (joyanokane (除夜の鐘)) to symbolize the 108 human sins in Buddhist belief, and to get rid of the 108 worldly desires regarding sense and feeling in every Japanese citizen.

From a Kundalini Yoga perspective, the sound of a bell energizes Chakras and balances the distribution of energy in the body.

In Nia we have a practice called “Creating the Space” where we take a few moments in silence to eliminate distractions in order to be more fully present to the class we are entering. By bringing the body, mind, emotions and spirit into stillness I find I enter the next moment with greater openness and curiosity.
So, next time you step into my class listen for the bell, let yourself drop into a quiet moment and join me in expanding our dance expression into the world, whether it is thanking front-line workers, honouring Black Lives Matter or celebrating the strawberries of June. We are all connected and all of life is a part of the dance.

For Whom the Bell Tolls
by
John Donne

No man is an island,
Entire of itself.
Each is a piece of the continent,
A part of the main.
If a clod be washed away by the sea,
Europe is the less.
As well as if a promontory were.
As well as if a manor of thine own
Or of thine friend's were.
Each man's death diminishes me,
For I am involved in mankind.
Therefore, send not to know
For whom the bell tolls,
It tolls for thee. 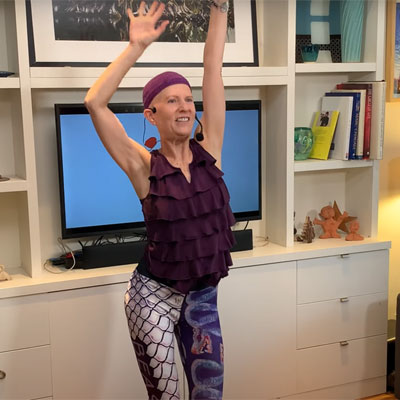